It was an adventure in itself even getting to El Paso. The train lines from Austin were obstructed by a fallen tree (thanks to a slew of storms) and we had to take a bus to San Antonio’s station. Once there, we sat around for about three hours while they prepared the trains to El Paso. While waiting we met a lot of nice people in line and had great conversations, so that made the time pass faster.

Once we arrived in the late afternoon from the overnight train, we were exhausted and hungry. We checked into  the Gardner Hotel, a dusty yet charming hotel that’s famous for being a rest stop of John Dillinger’s bank robbing spree. We were delighted to find that the pizza place directly next to the hotel, the Pizza Joint, had vegan options!

They were actually out of Daiya cheese that day and were extremely apologetic about it, and the wonderful staff were aware of what crusts and sauces were vegan-friendly. I ended up getting their thin crust pizza with garlic olive oil, kalamata olives, artichokes, red onion, and fresh basil. It actually didn’t even need the Daiya, I think it would’ve covered up the pizza’s nicely balanced flavor.

Peter wanted to keep things simple and just ordered two slices of cheese pizza. Little did he know that those slices were each bigger than his head. Check out the awkward posed bite photo he insisted on me taking.

Pizza Joint also had a small collection of board games, so we spent our lunch playing Battleship.

While we waited on our Uber at the Austin train station, we met a lovely woman named Eva who was delighted that we were visiting Texas on our honeymoon. We later ran back into her at the Texas State Capital and she offfered her phone number and an “insider tour” if we were ever in El Paso. So while in town, we met up with her and she drove us all around.

Eva volunteers at the University of Texas at El Paso (UTEP) so we got shown the campus, the library, and some of the recently renovated grounds. We also visited a tamale shop (which had dessert tamales that were vegan!), her former school, and some of El Paso’s other interesting sights.

Eva drove us up the mountain in the center of the city and we had an amazing view of El Paso and also Juarez, Mexico. According to her, the mountain writing on the Juarez side says “The Bible is good, read it”.

Meeting Eva was such an awesome part of our trip, and we parted with a hug and her telling us “Have a good life, and take care of people you meet along the way.” Such a nice woman. 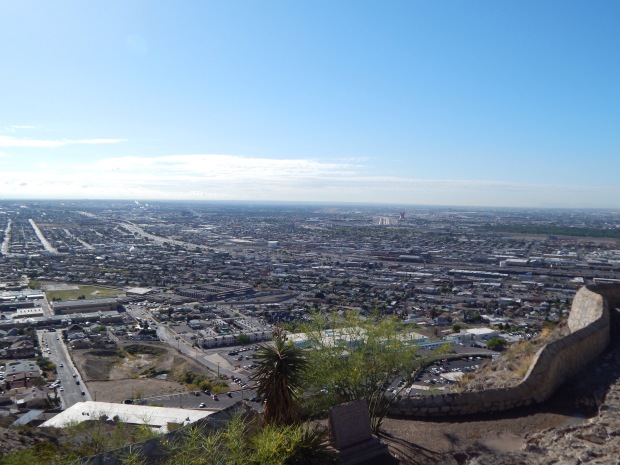 For lunch, we stopped by the Green Ingredient, which was only about two blocks from the hotel. Be warned, it is on the ground floor of the Chase Building with no signage outside. We walked by twice before we stopped and asked a security guard who pointed us inside.

Inside was an airy and well-lit dining area, with a friendly staff. Peter wasn’t particularly hungry (from the earlier tamales), so he just got dessert. He chose the avocado chocolate mousse, which was actually vegan. I like avocado mousse just as much as any other vegan, but this stuff is unrivaled. Really creamy and rich, on top of a soft chocolate cookie and sprinkled with cacao nibs.

I can’t resist anything with “buffalo” in the title, so I got the cauliflower wings with tofu ranch. Our waitress was nice enough to substitute broccoli for the celery since I abhor that vegetable. These were very spicy (a good thing in my book) and perfectly textured, just inbetween being too soft or crunchy. The ranch wasn’t as creamy as expected and had a very lemony flavor, but it worked well with the cauliflower.

After lunch we visited the Magoffin Home, a historic adobe home in downtown El Paso. We took the guided tour and it was a great way to spend an hour. We learned about how the adobe housing was made, a large amount of El Paso history, stories of the Magoffin family, and how this particular family impacted the growth and change of the town. A really neat place, just like El Paso itself.